Ducati V4 Superbike – Claudio Domenicali, the CEO of the Italian company Ducati, surprised us with an incredible announcement: A V4 engine will be launched for Ducati, leaving behind the traditional twin-cylinder with which Ducati has been participating in the World Superbike for almost three decades. Now, we’ll be expecting the New Ducati V4 Superbike for 2019.

In the history of Ducati, there have been many models like 851, 888, 916, 996, 998, 999, 1098, 1198, 1199 Panigale R. In none of them do we see anything different in their engine, but a two-cylinder configuration. This, according to different commentators, has been a risky proposition from Ducati. For Japanese motorcycles, we have almost always seen four-cylinder engines.

Of course, we do not have any technical or technical details for the development of the new Ducati V4 Superbike for 2019. The only thing we can deduce is the following: Ducati will take advantage of the experience accumulated with the V4 engine of Desmosedici MotoGP, to develop a new superbike that will face with power the mythical motorcycle that has dominated these two years, the Kawasaki Ninja ZX-10R. 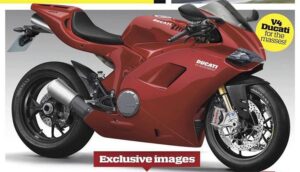 This was what Domenicali said about the MotoGP Desmosedici:

“The development of the engine we have done in MotoGP has been exceptional, we have an engine that is very reliable, lightweight, compact and with lots of interesting technology”

Years ago, Noale’s took a step that proved to be the right one. Noale went from V2 to V4, a scheme that brings together the best of the four inline cylinders and the two in uve. What Ducati looks for, is the success in MotoGP, following the path that others have already taken a long time. We do not know yet, what will be the hallmark of Ducati in that future linha Superbikes.

What will be the appearance of the New Ducati V4 Superbike for 2019? We do not know yet. However, Kardesign has not wasted time and has created a design based on the current Panigale. There is still much to know this new superbike, we can only imagine how it will look and perform.