Yamaha YZF-R6 2017 – Despite the fact that the Supersport segment has been in free fall sales for almost a decade, resulting in the discontinuation of emblematic models in brands such as Honda, Suzuki or Kawasaki, the Iwata factory wants to continue betting on this cylinder capacity by staging the best 600 of the moment and thus allowing an intermediate and logical step between its R3 and R1.

In this way, Yamaha has endowed this 5th generation YZF-R6 with a completely new style, modern and aggressive and clearly inspired by its sister the Yamaha YZF-R1. Its new design features a central air intake inspired by the M1, and its integrated dual LED headlights merge seamlessly with new curved LED strips that act as position lights and rear-view mirrors from the R1. 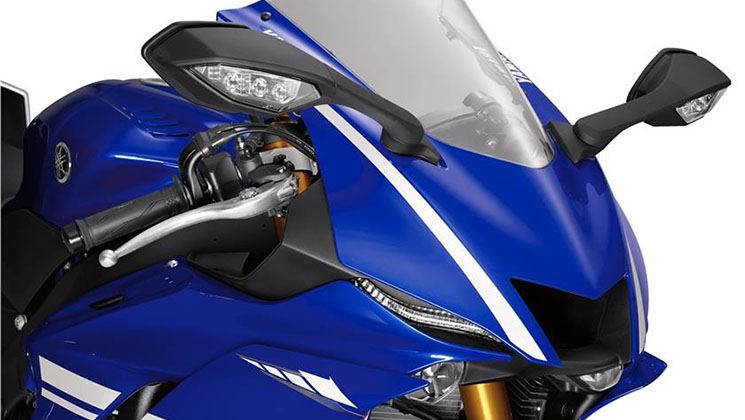 Its new aluminum tank is 1.2 kilos lighter and has new shapes that allow you to hug it better with your knees. The side fairings are also new, while the rear section has been redesigned to obtain a flatter and wider seat, and especially a new ridge with large air intakes that together maximize the aerodynamic performance of the bike and achieve An unmistakable aspect in its category.

To counteract the high cost of developing a new EURO4-compliant engine, Yamaha has opted to upgrade its R6 with a new part inherited some how from the R1, as well as providing state of the art electronics.

In this way, the new Yamaha YZF-R6 2017 is equipped with the new reversible fork KYB of the YZF-R1 fully adjustable. This front suspension is 43mm in diameter, compared to 41mm in diameter of the previous model, greatly improving its stability in braking and turn by curve. Similarly, with the new rear shock KYB latest generation, a rear train more stable, accurate and consistent than its previous version. 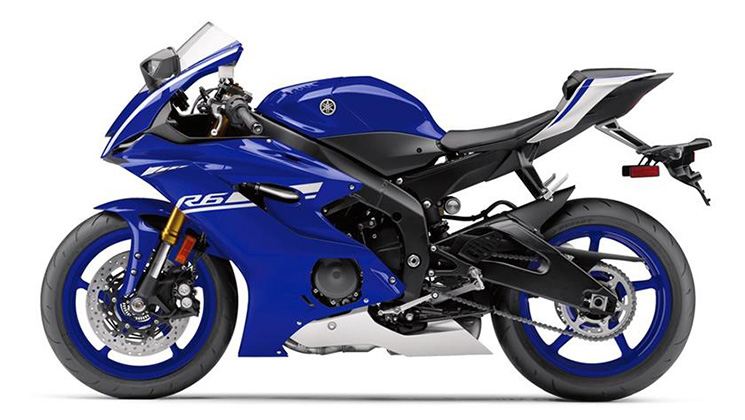 The brakes are another point to consider in this new generation of the Yamaha YZF-R6 2017. The Yamaha YZF-R1 discs, pump and calipers are mounted on the front axle, while the rear axle has similarly fitted the same caliper and pickups as the older sister, adapting the pump to the ABS of the motorcycle. In this case does not allow the disconnection.

More novelties are found in its newly designed tires and a machining of speed sensors for the ABS brake system. The subframe is another improvement point thanks to its manufacture of a molded CF magnesium, making it stronger and lighter, and 20 mm narrower at the front that allows the rider to get closer to the tank for better aerodynamics.

At the technological level, it equips a new ECU responsible for managing the advanced traction control system (TCS), which helps to avoid an unnatural sensation when intervening and compensating the wear of the rear tire. It has 8 levels of intrusion selectable by a switch on the handlebar and with the option to be disconnected. 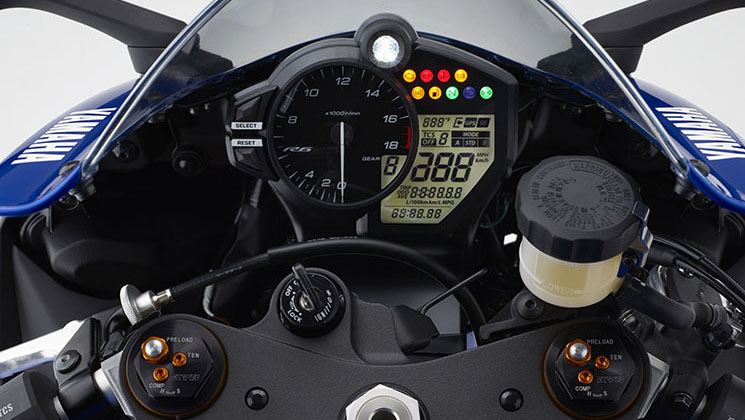 Another new electronic aid is found in its new D-Mode, inherited equally from the Yamaha YZF-R1. In this way we can choose between 3 positions, mode A, or more sporty, STD mode, the most standard, or B mode, the softest of the three.

The new Yamaha YZF-R6 2017 is also equipped with a new Quick Shift system that allows you to shift gears more quickly. This system is similar to the design used in the Yamaha YZF-R1, and immediately suppresses the torque when an upshift is detected, which allows the clutch to go up without clutch with full acceleration.

Finally, Yamaha has developed for this new generation of R6 a new dashboard that includes an analog style tachometer and a digital speedometer with a multi-function display where you can see all the information, such as TCS, ABS or the selected D-Mode.

We all know the extraordinary benefits the four cylinder engine and chassis of the R6 has, being together the reference for many years in supersport category, both amateur and in competition level.

With these arguments, and given the obligation to comply with the EURO4 regulations, we all expected a new, more powerful and modern engine able to compensate for the harsh environmental regulations, but we all know the reality has been very different when the Yamaha made public the new figures of its Yamaha YZF-R6 2017 model. 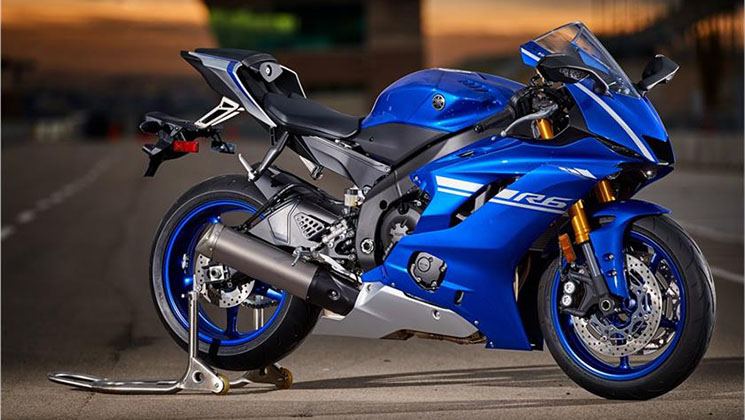 The power has decreased to 118.4 hp at 14,500 rpm, for the 129 hp that yielded its previous version, while the torque is set at 61.7 Nm at 10,500 rpm, causing a global loss of almost 10 km/hr of maximum speed with respect to the model 2016, leaving the tip in 261 km/hr. The total weight rises to 1 kg, a really good data if we consider the incorporation of its new electronics and parts, and although you may be upset by these figures, the reality can become quite different as now you will see.

The circuit, its natural habitat

We already know better what offers us this fifth generation of the Yamaha YZF-R6 2017, now it’s time to check if we really are in front of a better bike or not than its predecessor. For this we move to the Circuit, where we get a more accurate assessment of the new skills of this supersport.

Of course, the first visual impact is significant, and we can say that fall over again in love with this new generation of YZF-R6. This again has very aggressive lines and especially distinctive of any sports model of 600 c.c seen so far.

At the time of getting on the bike, we find a very aggressive position, which thanks to very low handlebars, its new tank and a better compensated seat, allows a better coupling over it either in high speed or moving on it. In spite of it, and like it happens with its older sister, it is possible to say that it is a “comfortable” sportbike.

With its new set of suspensions has achieved a very superior dynamic behavior. Its YZF-R1 inherited front axle is really solid and stable in strong braking, steering with millimetric precision at the apex of the curve, providing extra confidence and information. With the same result we found in the rear, having significantly improved its performance compared to its previous version. It works on a constant basis, solid and without losing capabilities with pace on the laps even imposing a strong rhythm, something fundamental to be able to open gas as soon as possible.

In the behavior of the engine is where we can find its greatest disadvantage. Although it is true that a strict series unit is remarkably accustomed to the EURO4 level of performance, its work in electronics allows a very constant and smooth delivery, and equipped with an approved exhaust tail “Grand Prix” of Akrapovic, will help to reduce weight and gain some extra horsepower.

Definitely and personally, I think this new generation Yamaha YZF-R6 2017 is better than its predecessor. Despite being mechanically weighed down by the EURO4, I must point out that the differences on the road would be less obvious, but above all we must remember that this model is usually the favorite to race in circuit, either in weekend tracks or to any championship , and it is in these circumstances that we encounter a much higher potential.