Is KTM MotoGP in Sepang, narrowing the gap?

Well, Pol Espargaro wanted to test in Sepang the evolution in which KTM has developed during this winter in its headquarters of Mattighofen. The Austrian factory traveled to the Malaysian circuit last week so that Mika Kallio was anticipating the work of its two official drivers, concentrating the work of the Finnish in the development of two new chassis that Smith and Pol have at their disposal in this first IRTA of the year.

The Spanish rider closed this first day away from the set time set by Casey Stoner with the Desmosedici GP17, closing the door of his box with a 2: 01.338 (+1.657). These results position him 16th, just behind his brother Aleix with the Aprilia RS-GP. Anyway, the gap is less than 2.3 seconds.

This time Pol focused on getting a better understanding of what KTM has brought to Sepang in everything related to the chassis and electrical systems. Pol has shown great satisfaction with the results obtained. KTM has made important improvements to the bike since the last test done in Valencia. For example, in the electronic system the operation is incredibly better. Progress is fast.

As the riders said, the improvements applied to the new chassis is a breakthrough, and it is still possible to continue taking the best of this. Apparently, what was developed in this new chassis, has liked the Spanish rider. However, he has stated the following: 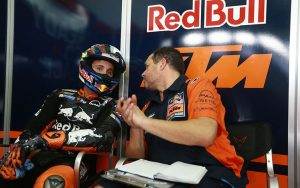 “Now we know more or less which chassis to choose, it’s an interesting chassis to work on, but who knows, maybe the second chassis is better?” We also have to work on electronics, which is currently our biggest problem. Improve engine control if we want to go faster. “

With regard to the gap between Pol and his brother, Pol has stated the following:

“We still can not say who has the best package or which bike is better, right now KTM is still new here, we’re only 1.6 seconds behind, it’s not bad, and we still have a lot of things to improve.”

There are still many things to do to grow and advance the performance of KTM machines. We hope they continue to surprise us with more innovations.