Marc Márquez has won pole position number 39 of his career in the Circuit of the Americas. The defending champion has set up territory in Q2 to start from the top spot for the fifth consecutive time in the US, where he has a total of four victories. Maverick Viñales and Valentino Rossi will accompany him on the front row of the grid.

Thus the two qualifying sessions have been developed:

Q1: Thing of two, an epic save

Jack Miller dominated much of the first timed training, with Jorge Lorenzo in second position two tenths of him. Reale Avintia Racing riders Héctor Barberá and Loris Baz were struggling to enter the Q2 access zone but failed to make it to the 14th and 15th places respectively. The highlight of Q1 was the spectacular save of Loris Baz entering the goal on his fast return (see video).

For the first time since Jorge Lorenzo joined the team of Ducati, he has passed to Q2.

Rabat will start sixteenth, with Bautista nineteenth despite riding the soft tires. The Espargaró brothers, who suffered falls in Q2, will close the grid, with Pol penultimate and Aleix in last place.

Marc Márquez was the first to launch his attack, marking a 2: 03.092 that gave him a close second advantage over Maverick Viñales, who had a small incident with Valentino Rossi. ‘The Doctor’ hindered him and almost touched him. The Spaniard showed signs of anger and reproached the action later. According to the journalist Borja González, neither of them gave more importance to the subject.

During the final moments there was an intense duel between Marc Marquez and Maverick Viñales. The two improved the first time of Márquez, although the one of Cervera took the cat to the water and obtained its fifth pole position in Austin, ahead of Viñales. The third placed, Valentino Rossi, was eight tenths of them.

Dani Pedrosa will open the second row of the grid, with Zarco in fifth position and Lorenzo sixth. Dovizioso (7th), Folger (8th) and Iannone (9th) will form the third row of the starting lineup.

The great absentee is Alex Rins, who suffered a ulna and radius fracture with displacement and is being treated in an Austin hospital. 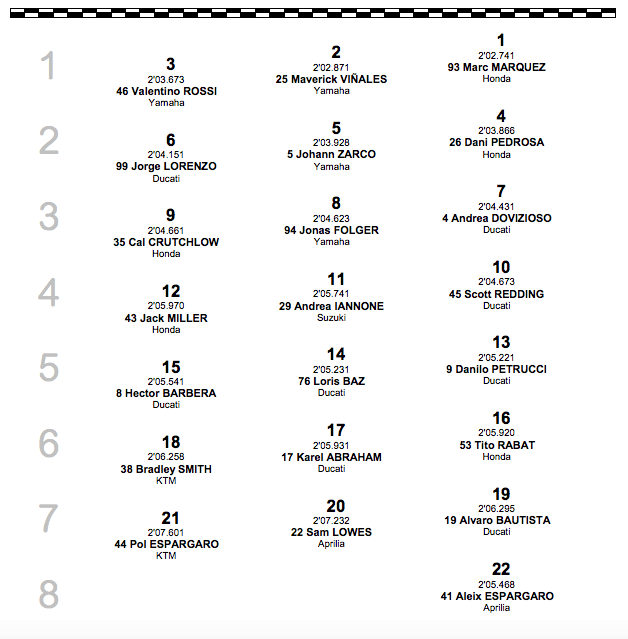 Marc Márquez: “I Feel that Maverick and I are Closer than in Qatar”
Lorenzo: “I’m Riding With a Little More Confidence”
Comment