Marc Márquez has fulfilled the odds and has won for the eighth consecutive time at Sachsenring, a race that has been marked by the excellent performance of the local rider Jonas Folger, and by the comeback that has led Maverick Viñales, who after starting on 11th place on the grid has been one position away from the podium. The MotoGP World Championship goes on holiday with new leader, Marc Márquez.

With nearly 20° C on the thermometer, a partially cloudy sky and totally dry track started the MotoGP race of the German Grand Prix at Sachsenring. The man of the pole, Marc Márquez, defended well his position of privilege in the grid and placed himself leader just after the lights went off, followed by his team mate Dani Pedrosa and by a Jorge Lorenzo that starred a good start in this German GP. The rookie Jonas Folger also starts strong in front of his audience, placing fourth behind Lorenzo, followed by Petrucci (5th) and Rossi (6th).

During this start of the race comes the first penalty for Héctor Barberá, who will have to complete a ride through as he had jump started. Championship leader Andrea Dovizioso starts discreetly, taking eighth place at the end of the fourth lap. In front of him, Folger has already recovered the gap that separated him from Pedrosa’s Honda and passed the HRC rider on te curve, passing him quickly, forming a group of three riders who are two seconds ahead of the second group, led by Petrucci .

25 laps to the end, Folger decides and overtakes Marquez and place himself  first in his home GP. The rookie of Tech 3 is very strong in this first part of the race and manages to keep at bay the Spaniard, that at the moment prefers to stay behind of the German. In the pursuing group, Valentino Rossi is placed fourth in the ninth lap after passing Petrucci, who now defending the attacks of the official Ducati, Dovizioso. Aleix Espargaró remains in this group, rolling sixth after ‘Dovi’.

Two laps later, Marquez do not want to be behind Folger anymore and overtake the German rider back. Pedrosa is already off the fight for the victory, more than 3.5 seconds off of these two riders. A few meters behind, Maverick Viñales continues to recover positions after starting 11th; The one of Yamaha is already sixth, behind of Dovizioso and Valentino Rossi. Another rider who is also rallying hard is Alvaro Bautista, who is seventh in the middle of the race.

With 11 laps outstanding, Viñales manages to pass Dovizioso in turn 13 and is placed fourth, in behind his teammate Valentino Rossi. The #25 does not think twice, and in that same lap passes the Italian to take the fourth position. In front, Marquez continues leading the race trying to open gap on a Jonas Folger who is still very close of Marc’s Honda.

With three laps left, Márquez decides to change the strategy of the race and strengthens the pace, setting a record in the first sector, an effort that allows him to put more than 1.5 seconds ahead of Folger on this lap. The German tries to follow the rhythm of the Spanish rider, but realizes that it is impossible and decides to settle for second place. A lap later, the #93 was getting its eighth consecutive victory at Sachsenring, the second of this season, a triumph that also puts it to the front of the general of MotoGP.

Folger gets his first podium in the premier class, and does so ahead of his fans in Germany. The podium is completed by Dani Pedrosa, who has not had the necessary pace to fight for victory at Sachsenring, finishing ahead of Maverick Viñales (4th), Valentino Rossi (5th) and Álvaro Bautista (6th), the best Ducati today in Germany. Good result also for Aleix Espargaró, 7th with the Aprilia RS-GP, and problems for Jorge Lorenzo, who could not pass from the 11th position after having rolled in leading positions during the start of the race.

With this victory, Marc Márquez begins his summer vacation as the new MotoGP leader with 129 points, five more than Maverick Viñales, now second overall. Andrea Dovizioso falls to third with 123 points, ahead of Valentino Rossi, who has 119 points. 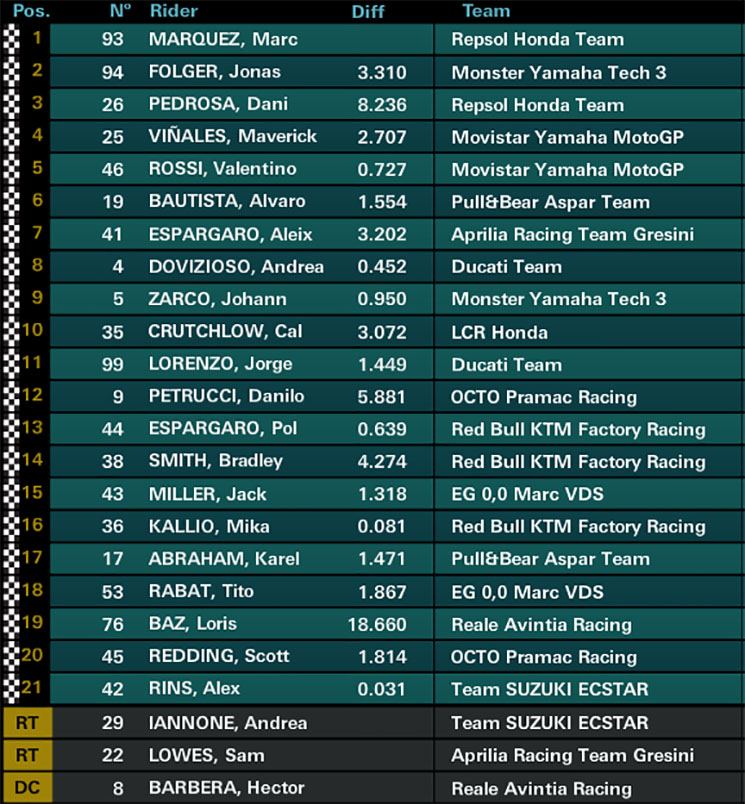