After finishing his holiday week in Mojácar, Almeria, Marc Márquez traveled to his native Cervera yesterday to spend a couple of days with his family before getting back on a plane to the Czech Republic, where he has scheduled a private test with His teammate Dani Pedrosa where both will have the opportunity to test some new developments in their respective RC213V in the face of the second half of the season that will start in Brno the first weekend of August.

Taking advantage of his trip to Cervera, Márquez has gone to the headquarters of his official fan club to make a ‘Facebook Live’ video with the nearly four million followers that the Spanish rider has in this Social Network, where he has been bombarded with questions From all over the world.

His  personal relationship with Valentino Rossi, what music he likes best, who would be ideal ideal team mate, what improvements his Honda needs in the second half of the season …

We have selected some of the most curious and interesting questions that Marc has received.

How is your current relationship with Valentino Rossi?

“Come on, the first one I read and Rossi comes out (laughs). My relationship with Valentino is normal, it’s a professional relationship that I think is the most important thing. He’s a great guy, what he’s doing at his age is incredible, I respect him 100%. ”

Do you think you will win this championship?

“We are there for that, to try to get 100%, it will be complicated because it is the tightest championship of the last years. For now, by little, we are leaders, and something is something. Then we will see what happens at the end of the year”

Who are your strongest rivals this year facing the championship?

“Impossible to say one, but I think Viñales and Rossi will be the ones that will make it more and more difficult”.

What does Honda need to improve?

“You always want more, you never have enough. When you improve a little more then you say ‘now I would need a little more’, there is always need for more. There are two points, one is the  acceleration, which is where we are working to try to improve it, and then also the stability in fast corners. It moves a bit the bike and it is not very funny, because it happens very fast and that is where we have to try to improve it.

Would you be world champion with another bike like the Suzuki?

“It is impossible to answer, I will always try to be where the heart asks me and it is clear that where I go and where it is where I will get 100% and it is because I trust that.”

What motivates you to improve having gained everything?

“To me what motivates me are my rivals, when your rivals improve is a motivation for you also to improve and try to grow, try to learn things from them, because they also have better things than yours.” You try to grow and improve as they do, and this makes you think about what you can improve day by day.

Have you kept all the bikes you’ve been a champion with?

“Luckily I have all of them, I have the 125 with which I won the World Championship, I also the Moto2 with which I won the World Championship and I also have the two MotoGP. Those are not mine, they are not my property, they are lend by Honda but the I have them here in the museum that we have, in an exhibition that we have in Cervera that you can come to see when you want. ”

How did you deal with the death of Luis Salom?

“When a fellow friend leaves you is hard, in the end it is a reality we see or do not want to see, but in the end we cannot forget that it is a sport of risk, a sport where every time you go on track you get on a motorcycle and you go to 300-350 km per hr, and it’s a risky sport. It’s clear that you never want to think about it, you never want it to happen, and when it happens it’s hard, it’s hard to get on the bike again and not think about it. ”

Who would be your ideal teammate?

“If I had to choose one it’s clear, it would be my brother, everything would be in the family and it would be a dream come true.” Why not? Someday … they say that dreams are made if you go after them, so I’m sure he will floow his and I will try to help him 100% so that this can be fulfilled. ” 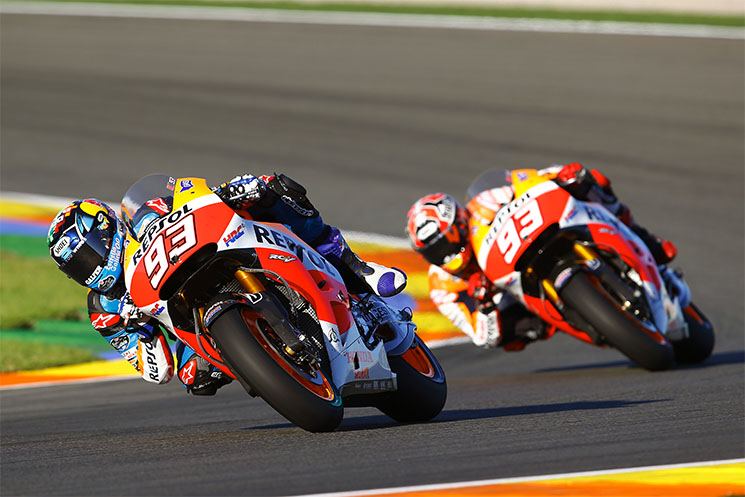 What is the perfect age to retire?

“It’s a question I’ve been asked about, until when I will be competing, or when I’ll try to retire. It’s hard to say, but you always try until the body holds, if the injuries respect you, why do not you try to stretch it as much as possible because it is your passion, and especially if you keep the motivation much better. ”

“I listen a lot to everything, but now in summer reggaeton always gets along, and always makes one dancing a little bit.”

And your favorite song?

“Favorite song I have enough, but one of Eminem, Lose Yourself, is a song that I like and also because it has a special felling, it is the last song I heard with my brother before he was world champion”

In this video you can see the full Live Facebook of Marc Márquez: