Marc Márquez and Jorge Lorenzo will face this weekend, in the Losail Circuit, the final stretch of preparation for the 2019 World Championship. It will be in the official Qatar test and will have three days of training to assess their physical condition and continue with the development of its Honda RC213V.

Before heading to Qatar, Lorenzo offered a wide interview to SKY Sport in which the Balearic pilot spoke of this new stage in his career, a new professional course that will make him coincide with the great dominator of the championship since the 2013 season. Marc Márquez. Together they add a whopping twelve world titles, 10 of them in the MotoGP category, a track record that makes the Repsol Honda couple the strongest of the entire paddock.

“I do not care because I think it’s the truth,” says Jorge Lorenzo regarding the strength of the binomial that Alberto Puig has managed to reunite. “If we look at the numbers it’s pretty clear that we are one of the strongest couples in MotoGP history, but sometimes you can win many titles because maybe the competition is not as high as it is today.” Without a doubt, we are one of the best couples in terms of numbers, but surely in speed and talent, we are even stronger than what only the numbers show “.

The relationship with the Spaniard is being compared with the one that Senna and Prost had in Formula 1 when both agreed at McLaren, although Jorge believes that they will not reach the point reached by both drivers: “Maybe I feel more like Prost, also because there is a difference of a few years like with Senna between Marc and me. Senna was more aggressive. In this sense, I feel more like Prost, many have seen this new couple in a negative way, maybe they expect Marc and me to make a disaster in a race and maybe we will help Dovizioso and Valentino to achieve the title. If we look at things differently, a champion who can contribute his experience is approaching in Márquez’s box. I am a rider who, with work and will, always becomes competitive. This may lead Marquez to give him something else. And I will do the same because I do not want to be defeated by Marquez. This will make the team grow. Both at the level of driving and technical level, for the experience I can provide. ” 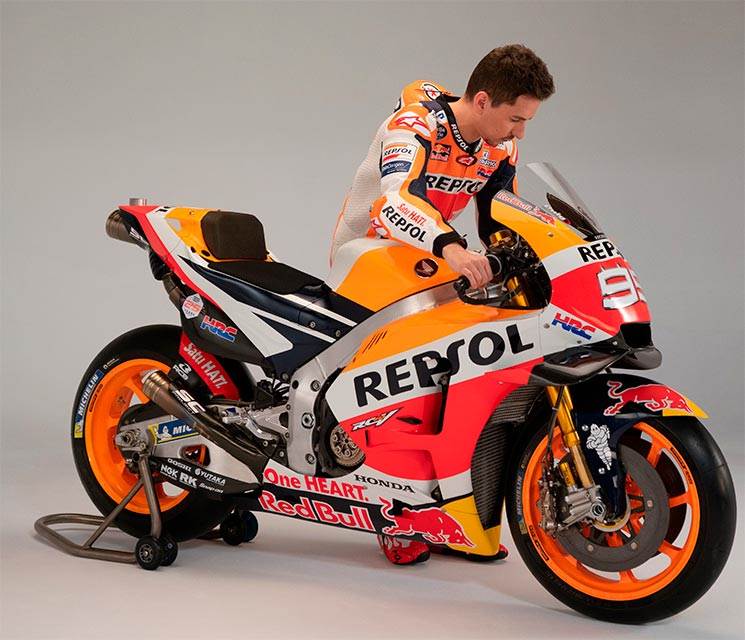 The Spaniard has commented that he is facing one of the biggest challenges of his career, and hopes to be able to get the most out of his driving: “When entering Honda, I accepted a very important challenge, just as important as the previous one [with Ducati] that I had to leave halfway. I have a very good feeling with Honda, I want to be ready. This injury will probably delay the maximum potential I can express for a few months. But the championship is long and it will take patience and a lot of work. Do I believe that I have not closed the Ducati chapter? I do not think about it because now I am a 100% Honda man, I will not say that I would like to end my career here, because ‘I had said it before’, so it’s better not to say it! ”

Lorenzo stressed that last season he really realized what the world of competition means to him, feeling fortunate to be part of the MotoGP grid: “We are lucky riders, but our life is hard, especially if you are very demanding like me, I work every day, more than 8 hours a day for my sport, I do it with pleasure, but it is true that you also suffer. Then there are the trips, all the commitments. When I think of myself letting myself run, I feel a sense of freedom, of being able to eat what I want, of being able to do sport in a less extreme way. But when in 2018 I realized that there really was the possibility of stopping racing, I really felt the passion and love that I have for this sport and I really did not want to leave it. Before this year I had never had this feeling. I received an interesting offer from the Yamaha Petronas, but I wanted something official, important. At that time, before signing with Honda, I suffered some depression. ”

The Spaniard has commented that it is positive that Márquez has not vetoed him, since he shows that he is thinking about the good of the brand: “I am very grateful to Marc for not having vetoed my arrival at Honda, he could have done it, but he did not He did, I would not be an official Honda driver now, and I appreciate it very much. ”

Finally, Lorenzo has acknowledged that he has a great memory of his time at Ducati and thanked the fans for the support he received: “I have always felt a great support of the 99.9% of the Ducati fans and I will never forget the days I spent in the Ducati World Week, because they showed me an incredible affection and I will always be grateful for this, sometimes you decide to sell when the stock is low, but then go back up, “he added in an ironic tone regarding his departure from Ducati.