Jonathan Rea has added today in Assen his sixth win of the season. The Kawasaki rider has had a nice fight with Chaz Davies until the start of the final lap, when the Welshman’s Ducati Panigale has stopped, forcing him to leave. The podium has been completed by Tom Sykes and Marco Melandri.

The first race of the weekend in Assen started with news of last hour: Jonathan Rea lost Superpole after being sanctioned with three positions in the starting grid by its incident with Chaz Davies in SP2. This penalty left Tom Sykes at the front of the starting grid, accompanied in the front row by Chaz Davies and Lorenzo Savadori.

As soon as the race light went out, Chaz Davies left masterfully and moved ahead of Sykes, followed by Jonathan Rea, Marco Melandri and Savadori. The Welsh rider squeezed hard at the start of the race, bringing about eight tenths of a point to Sykes in the first two turns, until Rea passed his team-mate and headed straight for Davies’s Panigale.

Rea only needed one lap to neutralize the advantage that Davies maintained, staying stuck to the Welsh Ducati for several turns. Sykes, third at that time, was trying to hook up with his Kawasaki teammate, without being able to reduce the 7 tenths that separated him from the two leading bikes. Marco Melandri rolled in a lonely fourth position, 5 seconds behind Sykes, and another 5 seconds ahead of Xavi Forés, who fought tooth and nail his fifth place against Alex Lowes’ Yamaha attacks.

The Yamaha Briton said goodbye eight laps to end because of a crash, running the same fate as his teammate Michael Van der Mark, who also fell to the ground during the first part of the race. Jordi Torres, for his part, rolled seventh past the middle of the race after a bad start, going up several positions.

Jonathan Rea does it again! He clinches his 10th victory at Assen with Tom Sykes in second… #DutchWorldSBK pic.twitter.com/Q00RBAI5SL

With four laps remaining, Jonathan Rea begins to prepare for his overtaking on Davies, proving to be very comfortable behind of the Ducati rider. Sykes cannot keep up with the 1’36 lows kept by the two riders on the lead and goes behind for more than 1.3 seconds in this final part of the race.

There are three laps left and the battle begins. Sykes puts the bike to Davies in the last sector, but the one of Ducati returns overtaking him to the entrance of the last chicane. The one of Kawasaki comes back again and maintains the first place in this penultimate lap, with Davies right behind. The surprise comes when the ducati rider stands at the start of the last lap, just past the chicane, a mechanical problem that leaves Davies out of the race missing a turn for the checkered flag.

The abandonment of Davies left to Rea rolling alone and leading the race, obtaining his sixth victory of the season, rising to the top of a podium that finally completed Tom Sykes and Marco Melandri. A great result for Xavi Forés, who finished fourth at the podium in Assen, ahead of Lorenzo Savadori (5th), Stefan Bradl (6th) and Román Ramos (7th), which has earned in Assen his best result at the World Championship Of SBK. The luck has not been on the side of Jordi Torres, who after going back to the seventh place has had to abandon in the final part of the race for problems. 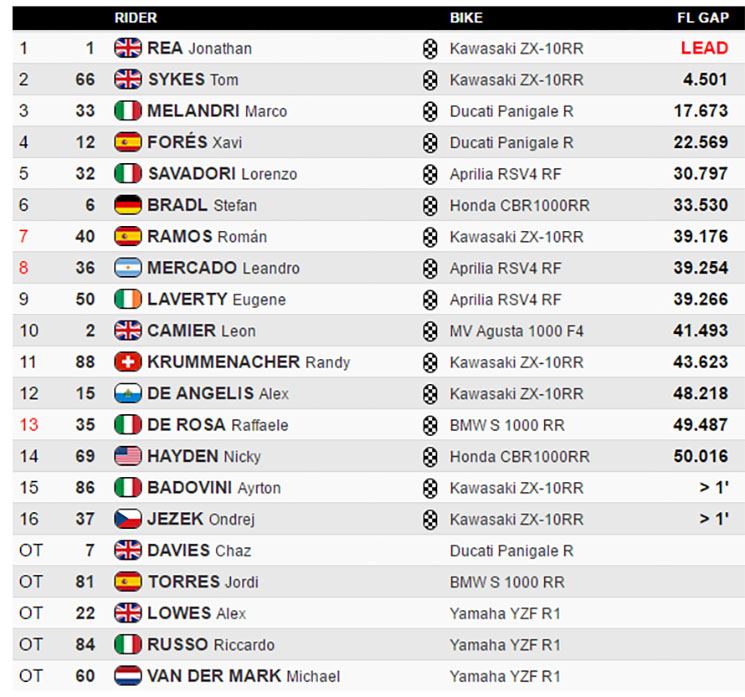