Shinden Roku – Mugen has presented at the last Tokyo Motorcycle Show the electric superbike with which John McGuinness and Guy Martin will compete this year the TT Zero of the Isle of Man. Named Shinden Roku, the Japanese factory has improved last year’s bike – named Shinden Go- with numerous internal changes that allow to reduce their final weight in two kilos to 248 kilos, in addition to a new fairing more aerodynamic and a sharp edge with which seek to improve the maximum speed in the fastest sections of the Mountain Course.

On paper, the engine is still the same as the one used last year: a three-phase electric, water-cooled brushless type brushless permanent magnet capable of delivering 160.9 horsepower, with an insane maximum torque of 210 Nm.

What could change are the batteries used to power the propellant. According to Mugen, these are rechargeable lithium ion laminated batteries manufactured by Maxell with a voltage of 370 watts or more, without going into detail. It is important to remember that one of the key points to be competitive in TT Zero is to find the perfect balance between the capacity of the batteries and the final weight of the bike (more batteries = higher power for more kilometers, but also more weight). 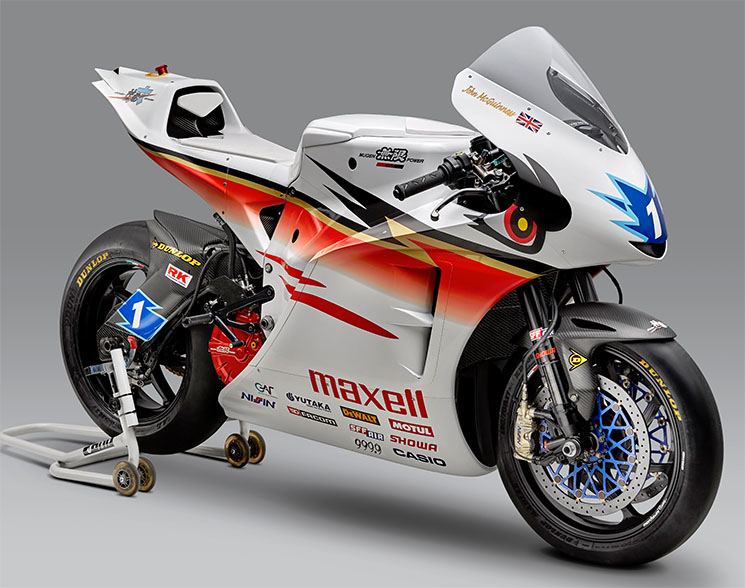 As for the cycling part, the Shinden Roku is a real racing bike. The chassis, of monocoque type – like the one of the Panigale – is manufactured in a mixture of plastic and carbon fiber. The brakes and suspensions are 100% Japanese, with a Showa SFF front fork and Nissin monobloc radial calipers. The wheels are made by Marchesini, forged magnesium, while the tires are a sticky Dunlop KR slick type.

You May Also Read:

For McGuinness, 2017 will be his sixth season alongside Mugen in the TT. The 44-year-old already knows what it is to climb to the top of the podium at the controls of a Shinden: he did it in 2014 and 2015, and was about to achieve it also in 2016, until a failure on his bike forced him Abandon the race. The Morecambe Missile is also the owner of the TT Zero record with 119.27 mph.

For his part, for Guy Martin this year will be his second participation in the TT Zero. In 2015, the Grimsby driver was the late substitute of the injured William Dunlop to the controls of an electric Victory with which it obtained the fourth position in race, signing a clock of 20 minutes and 37 seconds (109.71 mph).