Suzuki GSX-700T Turbo – Suzuki left us craving for something in the last Milan expo. The Japanese brand did not present any novelty outstanding for 2018 beyond the SV650X, a cofe racer version of its popular naked from which Suzuki wants to take advantage of the new ‘vintage’ fashion era that the naked of medium and high size segment is living.

Also striking was the Suzuki Katana Concept, a prototype designed by Rodolfo Frascoli and the company Engines Engineering based on the chassis and engine of the current GSX-S1000F, a motorcycle that attracted many looks and could serve as a starting point for the Hamamatsu factory to recover a model that was historicly iconic in the 80s.

However, despite the fact that there were many of us who were waiting for it, at the Suzuki stand there was no sign of the new well expected Hayabusa model or the Recursion turbo, two models that we practically took for granted in the face of this latest EICMA 2017. 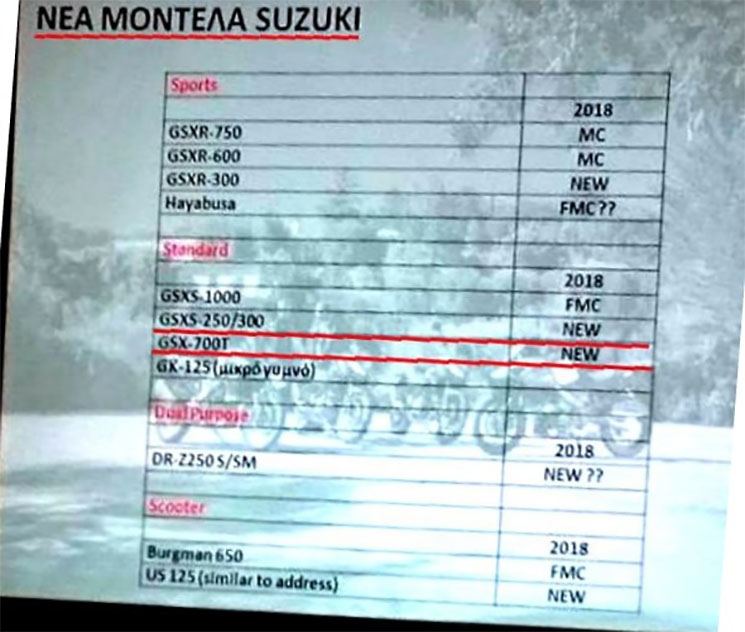 Fortunately, according to the latest filtration of the Greek portal Bikeit.gr, we can confirm that Suzuki plans to launch its first turbo model in 2018, officially named Suzuki GSX-700T Turbo.

In the image that you can see below – captured during a meeting between Suzuki dealers in Greece – you can see the catalog of new features that the Japanese firm plans to launch in Europe over the next year, highlighting in this list the new Suzuki GSX-700T Turbo.

This model will be derived from the Recursion concept, a futuristic-cut sport-tourism that Suzuki already presented a few years ago as a possible turbo bike project that will finally be released in 2018.

The engine used will be an evolution of the EX7 presented at the 2015 Tokyo Motor Show, a bi-cylinder in line with a displacement close to 700 cc instead of the original 587 cc of the original EX7, retaining its supercharging system with variable geometry. The figures of power are all an incognito, although it speaks of about 120 hp thanks to the use of supercharging.

The image filtered by Bikeit.gr also leaves us another important novelty: the arrival of a Suzuki GSX-R 300. A strange a priori movement considering that Suzuki presented its new GSX-R 250 a little more than a year ago, a motorcycle that it was one step behind the competition in terms of pure power and performance.

Will a GSX-R 300 with more cubicaje and horses arrive soon? It would be good news and one more candidate for the Supersport 300 World Cup.