Valentino Rossi is clear that, the YZR-M1 chassis not been updated in Sachsenring today, the race would have ended “like Waterloo”, that is to say, an absolute disaster. After a difficult weekend for the two official Iwata factory riders, the #46 gives his fifth place finish in Germany a good thumb, although he regrets being behind his team-mate Maverick Viñales.

“Of one thing I’m sure, without the new chassis this would have been like Waterloo, as happened in Jerez and Barcelona,” joked Valentino with the press during his talk with the media. “After a difficult weekend, I can be happy with a result that I would not have been satisfied with on another occasion. The race was complicated, I always had someone pushing behind me, and I had to push more from the first to the last lap. It was one of the most exhausting races I ever did. “

Valentino confesses that the two problems he suffered in the free practice on Friday with the gas pump of his motorcycle made him “waste time” to improve the dry setup, and is convinced that he could have reached the podium if I did not get delayed so much today: “We had some bad luck because of the two problems we had in practice, which made me lose my time. Luckily it did not rain and with the new bike I was able to be more competitive. If I had a good pace, and with a better position at the start,  I would have been able to fight for the podium. “

The Italian’s biggest regret is to finish behind his team-mate, who is now second overall with a five-point lead over Valentino: “It’s a shame to be behind Viñales. The Championship is like this, but today he was faster than me. “ 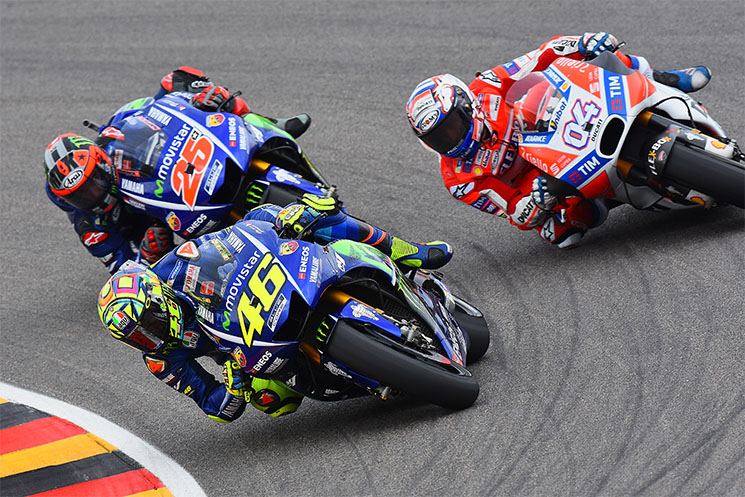 Asked by Jonas Folger’s excellent performance in front of his audience at Sachsenring, Rossi does not hide that “both Jonas and Zarco are feeling good with the M1, but above all, they are fast riders. Naturally we need to be able to finish in front of the satellite bikes, but if we look at the overall, Maverick and I are ahead of them. “

Valentino goes on holiday “happy” to have achieved a victory in this first part of the season and to be “10 points away of the leader”, Marc Márquez. “I am one of the five riders fighting for the title, and on the other hand, there are many doubts, not only about myself, but also about everybody. It is a difficult situation to interpret and that is why we need to continue working.”

The arrival of summer in MotoGP involves more work by the factories, which are now preparing and developing part of the material that their riders will debut in the second half of the season. The #46 Yamaha believes that “definitely need to bring more improvement, although we run the risk of making a mistake. This year is hard to guess which way to go. For now I’m happy because in the last two races the bike has improved.”

From August it will start the second half of the season. Nine races in which Valentino will try to shine on some of the circuits he likes the most like Misano or one of the three races that are held in Japan, Malaysia and Australia. “We need to think about Brno and be ready when we get there,” said the 38-year-old.

Marc Márquez Does not Forgive in Germany!
Márquez Adds His 8th Consecutive Pole in Sachsenring
Comment