WorldSBK and MotoAmerica team up this weekend to compete under the California sun. Laguna Seca will host its race number 30 of the World-wide Superbike and will be the scene on which it is disputed the last appointment before the summer break. Jonathan Rea arrives at the American appointment as leader of the general, and his goal is to leave on vacation with a point distance higher than he has now: 50 points.

Tom Sykes, Chaz Davies, Eugene Laverty, Marco Melandri and Rea himself know what it is to win on Monterey asphalt. Davies and Melandri start with an advantage if you take into account that Ducati is the most successful brand. The Italian brand has added 12 wins, by 6 of Kawasaki. The negative part for Borgo Panigale is that Davies drags the injury he suffered in Misano after an incident with Jonathan Rea. Despite this, the Welsh confirms that he has little pain and waits for the OK of the doctors to be able to dispute the race.

If he rides the Panigale, Davies will face the  Kawasaki Racing Team riders, who split the winning 2016 races. Sykes figures in California are revealing: he is currently the second rider with more podiums (7) in The American track, only behind Troy Corser (12). 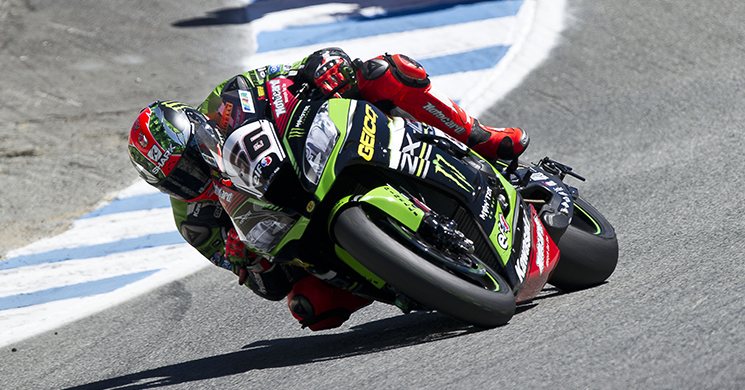 The three Spanish riders face the United States races after a difficult weekend in Misano. None of them finished the second test of San Marino due to technical problems, although they remain in the same area in ​​the general classification: Xavi Forés is seventh, with Jordi Torres ninth and Román Ramos in eleventh position.

Nicky Hayden will be very present at Laguna Seca. The California circuit is one of the most successful tracks, and this time will be replaced by Jake Gagne, the MotoAmerica rider and champion of the Red Bull Rookies Cup of 2010.

This weekend, WSBK will share circuit with MotoAmerica, a contest where Toni Elías dominates with iron hand. In the 10 races so far, the #24 has won 6 races and 3 second positions. The next rider in the general classification is Roger Hayden, who is 30 points behind the Catalan rider. Third is Cameron Beaubier, with almost 50 point behind the first position in the general.

The lower class of the World Superbike, such as WorldSSP, WorldSSP300 or STK100 will not attend the Laguna Seca event.

TT Isle of Man – Ride on the Edge: First Trailer
MotoGP Goes on Holiday in the Most Open Season of the 21st Century
Comment